It’s been way too  long. Many print failures and life taking over delayed this quite a bit, but I now have some toys ready. Here they are – a set of three of my “Logo Monster” packaged together. I am going to launch a kickstarter – probably in late 2017 – and sell a few of these sets to gauge interest. 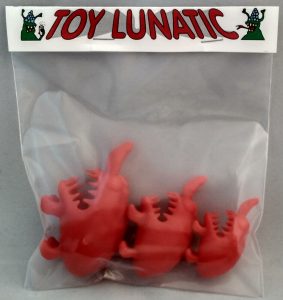 You’re probably wondering about the name change. I do another thing on the net called Wine Lunatic. I’m also starting Chocolate Lunatic. When I discovered that Toy Lunatic was still available I decided to go with that for the toys. Partly because it’s shorter and rolls off the tongue better than Mad Martian Toys, partly because there are too darn many Mad Martians out there, and partly because I myself am known as Mad Martian so the “company” should have it’s own name.

This entry was posted in Uncategorized. Bookmark the permalink.